In 2008 Astrojazz successfully applied to the Scottish Arts Council (now Creative Scotland) for a live music touring grant. The resulting project saw the acclaimed vocalist and performer Eska Mtungwazi, originally from Zimbabwe but based in London, succesfully tour a world-class band around Scotland, from remote villages to Glasgow’s premiere music space. Eska is known both for her solo work, but also for her appearances with Zero 7, Nitin Sawhney and the Cinematic Orchestra. Music and songwriting that resulted in the tour is scheduled to be released on a forthcoming album.

Astrojazz coordinated and managed the tour from conception and booking through to marketing and execution. 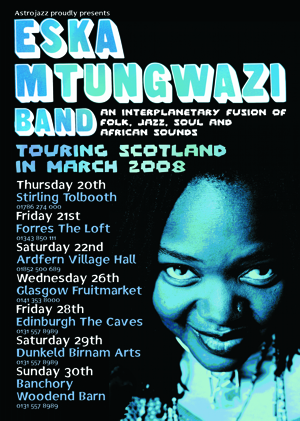 < Back to Tours & Management